Saint Tikhon, Patriarch of Moscow and Apostle to America was born as Vasily Ivanovich Belavin on January 19, 1865 into the family of Ioann Belavin, a rural priest of the Toropetz district of the Pskov diocese. His childhood and adolescence were spent in the village in direct contact with peasants and their labor. From his early years he displayed a particular religious disposition, love for the Church as well as rare meekness and humility.

When Vasily was still a boy, his father had a revelation about each of his children. One night, when he and his three sons slept in the hayloft, he suddenly woke up and roused them. He had seen his dead mother in a dream, who foretold to him his imminent death, and the fate of his three sons. She said that one would be unfortunate throughout his entire life, another would die young, while the third, Vasily, would be a great man. The prophecy of the dead woman proved to be entirely accurate in regard to all three brothers.

From 1878 to 1883, Vasily studied at the Pskov Theological Seminary. The modest seminarian was tender and affectionate by nature. He was fair-haired and tall of stature. His fellow students liked and respected him for his piety, brilliant progress in studies, and constant readiness to help comrades, who often turned to him for explanations of lessons, especially for help in drawing up and correcting numerous compositions. Vasily was called “bishop” and “patriarch” by his classmates.

In 1888, at the age of 23, Vasily Belavin graduated from the Saint Petersburg Theological Academy as a layman, and returned to the Pskov Seminary as an instructor of Moral and Dogmatic Theology. The whole seminary and the town of Pskov became very fond of him. He led an austere and chaste life, and in 1891, when he turned 26, he took monastic vows. Nearly the whole town gathered for the ceremony. He embarked on this new way of life consciously and deliberately, desiring to dedicate himself entirely to the service of the Church. The meek and humble young man was given the name Tikhon in honor of Saint Tikhon of Zadonsk. He was transferred from the Pskov Seminary to the Kholm Theological Seminary in 1892, and was raised to the rank of archimandrite. Archimandrite Tikhon was consecrated Bishop of Lublin on October 19, 1897, and returned to Kholm for a year as Vicar Bishop of the Kholm Diocese. Bishop Tikhon zealously devoted his energy to the establishment of the new vicariate. His attractive moral make-up won the general affection, of not only the Russian population, but also of the Lithuanians and Poles. On September 14, 1898, Bishop Tikhon was made Bishop of the Aleutians and Alaska. As head of the Orthodox Church in America, Bishop Tikhon was a zealous laborer in the Lord’s vineyard.

He did much to promote the spread of Orthodoxy, and to improve his vast diocese. He reorganized the diocesan structure, and changed its name from “Diocese of the Aleutians and Alaska” to “Diocese of the Aleutians and North America” in 1900. Both clergy and laity loved their archpastor, and held him in such esteem that the Americans made Archbishop Tikhon an honorary citizen of the United States.

In 1905, the American Mission was made an Archdiocese, and Saint Tikhon was elevated to the rank of Archbishop. He had two vicar bishops: Bishop Innocent (Pustynsky) in Alaska, and Saint Raphael (Hawaweeny) in Brooklyn to assist him in administering his large, ethnically diverse diocese. In June of 1905, Saint Tikhon gave his blessing for the establishment of Saint Tikhon’s Monastery.

In 1907, he returned to Russia, and was appointed to Yaroslavl, where he quickly won the affection of his flock. They came to love him as a friendly, communicative, and wise archpastor. He spoke simply to his subordinates, never resorting to a peremptory or overbearing tone. When he had to reprimand someone, he did so in a good-natured, sometimes joking manner, which encouraged the person to correct his mistakes.

When Saint Tikhon was transferred to Lithuania on December 22, 1913, the people of Yaroslavl voted him an honorary citizen of their town. After his transfer to Vilnius, he did much in terms of material support for various charitable institutions. There too, his generous soul and love of people clearly manifested themselves. World War I broke out when His Eminence was in Vilnius. He spared no effort to help the poor residents of the Vilnius region who were left without a roof over their heads or means of subsistence as a result of the war with the Germans, and who flocked to their archpastor in droves. After the February Revolution and formation of a new Synod, Saint Tikhon became one of its members. On June 21, 1917, the Moscow Diocesan Congress of clergy and laity elected him as their ruling bishop. He was a zealous and educated archpastor, widely known even outside his country.

On August 15, 1917, a local council was opened in Moscow, and Archbishop Tikhon was raised to the dignity of Metropolitan, and then elected as chairman of the council. The council had as its aim to restore the life of Russian Orthodox Church on strictly canonical principles, and its primary concern was the restoration of the Patriarchate. All council members would select three candidates, and then a lot would reveal the will of God. The council members chose three candidates: Archbishop Anthony of Kharkov, the wisest, Archbishop Arseny of Novgorod, the strictest, and Metropolitan Tikhon of Moscow, the kindest of the Russian hierarchs.

On November 5, following the Divine Liturgy and a Molieben in the Cathedral of Christ the Savior, a monk removed one of the three ballots from the ballot box, which stood before the Vladimir Icon of the Mother of God. Metropolitan Vladimir of Kiev announced Metropolitan Tikhon as the newly elected Patriarch. Saint Tikhon did not change after becoming the primate of the Russian Orthodox Church. In accepting the will of the council, Patriarch Tikhon referred to the scroll that the Prophet Ezekiel had to eat, on which was written, “Lamentations, mourning, and woe.” He foresaw that his ministry would be filled with affliction and tears, but through all his suffering, he remained the same accessible, unassuming, and kindly person.

All who met Saint Tikhon were surprised by his accessibility, simplicity and modesty. His gentle disposition did not prevent him from showing firmness in Church matters, however, particularly when he had to defend the Church from her enemies. He bore a very heavy cross. He had to administer and direct the Church amidst wholesale church disorganization, without auxiliary administrative bodies, in conditions of internal schisms and upheavals by various adherents of the Living Church, renovationists, and autocephalists. The situation was complicated by external circumstances: the change of the political system, by the accession to power of the godless regime, by hunger, and civil war. This was a time when Church property was being confiscated, when clergy were subjected to court trials and persecutions, and Christ’s Church endured repression. News of this came to the Patriarch from all ends of Russia. His exceptionally high moral and religious authority helped him to unite the scattered and enfeebled flock. At a crucial time for the church, his unblemished name was a bright beacon pointing the way to the truth of Orthodoxy. In his messages, he called on people to fulfill the commandments of Christ, and to attain spiritual rebirth through repentance. His irreproachable life was an example to all.

In order to save thousands of lives and to improve the general position of the church, the Patriarch took measures to prevent clergy from making purely political statements. On September 25, 1919, when the civil war was at its height, he issued a message to the clergy urging them to stay away from political struggle.

The summer of 1921 brought a severe famine to the Volga region. In August, Patriarch Tikhon issued a message to the Russian people and to the people of the world, calling them to help famine victims. He gave his blessing for voluntary donations of church valuables, which were not directly used in liturgical services. However, on February 23, 1922, the All-Russian Central Executive Committee published a decree making all valuables subject to confiscation.

According to the 73rd Apostolic Canon, such actions were regarded as sacrilege, and the Patriarch could not approve such total confiscation, especially since many doubted that the valuables would be used to combat famine. This forcible confiscation aroused popular indignation everywhere. Nearly two thousand trials were staged all over Russia, and more than ten thousand believers were shot. The Patriarch’s message was viewed as sabotage, for which he was imprisoned from April 1922 until June 1923.

His Holiness, Patriarch Tikhon did much on behalf of the Russian Orthodox Church during the crucial time of the so-called Renovationist schism. He showed himself to be a faithful servant and custodian of the undistorted precepts of the true Orthodox Church. He was the living embodiment of Orthodoxy, which was unconsciously recognized even by enemies of the church, who called its members “Tikhonites.”

When Renovationist priests and hierarchs repented and returned to the church, they were met with tenderness and love by Saint Tikhon. This, however, did not represent any deviation from his strictly Orthodox policy. “I ask you to believe me that I will not come to agreement or make concessions which could lead to the loss of the purity and strength of Orthodoxy,” the Patriarch said in 1924. 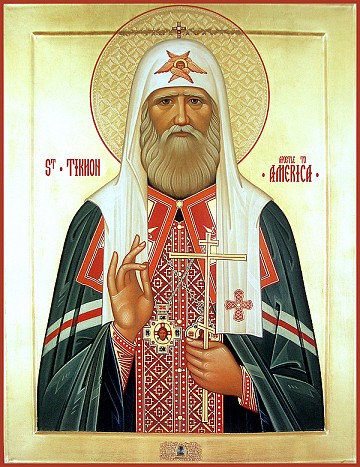 Being a good pastor, who devoted himself entirely to the church’s cause, he called upon the clergy to do the same: “Devote all your energy to preaching the word of God and the truth of Christ, especially today, when unbelief and atheism are audaciously attacking the Church of Christ. May the God of peace and love be with all of you!”

It was extremely painful and hard for the Patriarch’s loving, responsive heart to endure all the Church’s misfortunes. Upheavals in and outside the church, the Renovationist schism, his primatial labors, his concern for the organization and tranquility of Church life, sleepless nights and heavy thoughts, his confinement that lasted more than a year, the spiteful and wicked baiting of his enemies, and the unrelenting criticism sometimes even from the Orthodox, combined to undermine his strength and health.

In 1924, Patriarch Tikhon began to feel unwell. He checked into a hospital, but would leave it on Sundays and Feast Days in order to conduct services. On Sunday, April 5, 1925, he served his last Liturgy, and died two days later. On March 25/April 7, 1925 the Patriarch received Metropolitan Peter and had a long talk with him. In the evening, the Patriarch slept a little, then he woke up and asked what time it was. When he was told it was 11:45 P.M., he made the Sign of the Cross twice and said, “Glory to Thee, O Lord, glory to Thee.” He did not have time to cross himself a third time.

Almost a million people came to say farewell to the Patriarch. The large cathedral of the Donskoy Monastery in Moscow could not contain the crowd, which overflowed the monastery property into the square and adjacent streets. Saint Tikhon, the eleventh Patriarch of Moscow, was primate of the Russian Church for seven and a half years.

On September 26/October 9, 1989, the Council of Bishops of the Russian Orthodox Church glorified Patriarch Tikhon and numbered him among the saints. For nearly seventy years, Saint Tikhon’s relics were believed lost, but in February 1992, they were discovered in a concealed place in the Donskoy Monastery.

It would be difficult to imagine the Russian Orthodox Church without Patriarch Tikhon during those years. He did so much for the Church and for the strengthening of the Faith itself during those difficult years of trial. Perhaps the saint’s own words can best sum up his life: “May God teach every one of us to strive for His truth, and for the good of the Holy Church, rather than something for our own sake.”